Mobile users in LA County now have the ability to send text messages to 9-1-1, giving hearing and speech impaired residents, or those in situations where it is too dangerous to dial 9-1-1, and making noise could put their life in jeopardy, a potentially lifesaving option. END_OF_DOCUMENT_TOKEN_TO_BE_REPLACED Crime increases during the holiday season as holiday shopping puts more prizes around for the thieves to ply there trade.
Shopping on line can leave packages on porches as easy pickings.
Gifts left in cars or visible through windows are a draw for the thieves.

See below for tips on avoiding being a victim. END_OF_DOCUMENT_TOKEN_TO_BE_REPLACED Devonshire Community, I would like to announce the selection of Devonshire’s Newest Senior Lead Officer, Police Officer III Phillip Sellers.

Officer Sellers will be working Basic Car 17A49, filling the position left by retired Senior Lead Officer Jannie Angeles. He was selected from a pool of highly qualified candidates. Officer Sellers has served the Devonshire community for many years. He will be an asset to the Devonshire SLO office as he continues to serve the community.

Our own Devonshire division of LAPD has published an app specifically tailored to our community so you can stay informed and connected with important public safety information. The app has info on real time crime data, filing a police report, youth programs, and much more.

It’s important that our public safety personnel remain connected to the people and communities they serve. I want to thank the Devonshire Division leadership for developing this app and using modern tools to better communicate with the people they protect and serve.

The app is available for smart phone download. Check it out for yourself today. 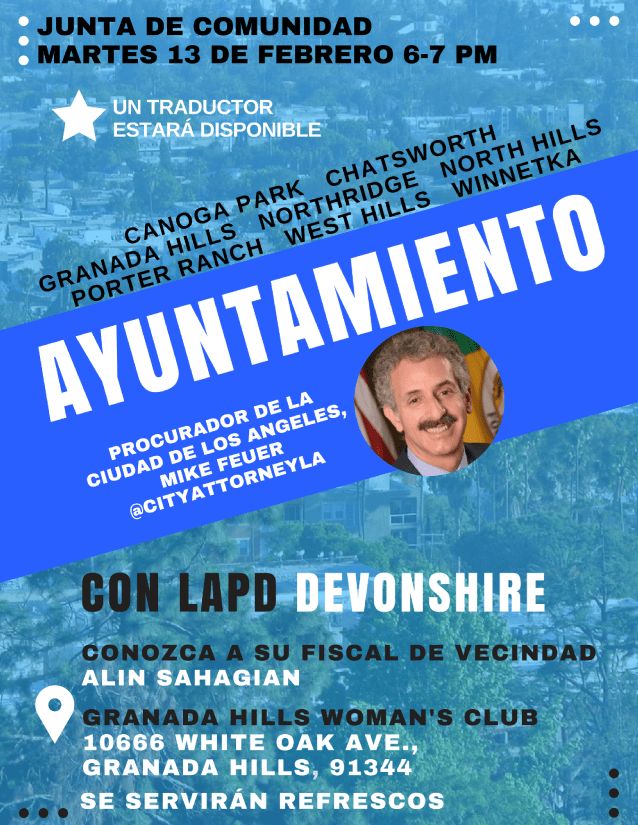 Los Angeles Police Chief Charlie Beck will retire after nearly a decade at the helm, he announced today

Beck oversaw major changes at the department during his tenure as well as some of the most dramatic moments in department history, including last year’s cadet scandal and the murderous rampage and manhunt of former officer Christopher Dorner. He ushered in the era of police body cameras and was the target of countless Black Lives Matter protests, alleging he failed to take police brutality in minority communities seriously. His supporters, on the other hand, saw him as a reformer with enough clout among the rank and file to institute real change and the wisdom garnered from the mistakes of the LA Riots to steer the department toward a community-oriented approach to policing.

Beck issued a statement on Twitter, thanking the city where spent his career.

“Serving the citizens of Los Angeles for over 40 years has been the honor of a lifetime,” Beck wrote. “Leading the men and women of the LAPD — my family — has been a privilege I never thought I’d be worth of. Today, I am announcing my retirement effective June 27th of this year. END_OF_DOCUMENT_TOKEN_TO_BE_REPLACED Residential neighborhood in the vicinity of Zelzah and Rexbon (North of Rinaldi).

The incident occurred on today’s date at approximately 3 pm.

Consistent with the “knock-knock” burglary method the resident answered the door and was confronted by the suspect who stated he was looking for his workout partner named Anthony.

When turned away by the homeowner the suspect pulled a hoodie over his head and fled in a Black Range Rover that was staged nearby.

Noteworthy is that it appears the suspect used an electronic jamming device to interfere with the residents Ring Alert system and as a result the incident was not caught on camera.

The suspect is described as a young Male African/American 16/22 yrs with a secondary vehicle (Black SUV) also staged across the street of the residence.

Please remember to always lock your doors, remain vigilant, work with your neighbors and be highly suspicious of strangers knocking on doors.

The “knock knock” method obviously refers to individuals ringing the doorbell as well and, as in most cases, when confronted by the homeowner these individuals will use a lame excuse as to why they are there.

In today’s event, in particular, I have no doubt the homeowner prevented a residential burglary from occurring. Yesterday, I was proud to join the Los Angeles Police Department to announce the arrest of five suspects and the confiscation of thousands of dollars in stolen property. This was the result of a 6 month investigation by the LAPD/Operations Valley Bureau’s (OVB) Catalytic Converter Task Force (CCTF).

The CCTF was formed to combat catalytic converter thefts occurring throughout San Fernando Valley. Catalytic converters are targeted by thieves because they contain precious metals such as platinum, rhodium, and/or palladium.

Detectives learned that victims would start their vehicles and then notice loud sounds originating from underneath their vehicles. After inspecting the vehicles, the victims found that their catalytic converter had been cut from the exhaust system. Victims found that the average cost to replace and repair the exhaust system was approximately $1,700.00.

Not only do the victims of these types of crime incur this expense, but for many, their personal vehicle is their only mode of transportation to get to work. This crime effects the livelihood of the victims. I am proud of our LAPD Devonshire Division and the Catalytic Converter Task Force for putting these criminals behind bars. The first LA police officers will begin wearing body cameras on Monday as city leaders look for funding to outfit all cops with them.

Starting Monday, body cameras will be handed out to Los Angeles police officers at the Mission Station — the first of 860 cameras that will be distributed to officers in three divisions.

Officers at the Mission Division will be the first to get training on the cameras, followed by officers at the Newton Division on Sept. 15 and the Central traffic and specialized divisions on Sept. 28, LAPD Chief Information Officer Maggie Goodrich told the Police Commission.

Goodrich said the department spent the past few months installing the network and infrastructure for the body cameras.

LAPD officials chose a Taser body camera that is designed to be worn on the chest.

The cameras were donated to the department through the Los Angeles Police Foundation.

Mayor Eric Garcetti has also called for a $10 million plan to outfit the entire police department with body cameras. The City Council earlier this year approved a budget that allocates half of the funding needed to purchase 7,000 additional cameras. Officials are applying for federal grants to pay for the other half of the camera purchase costs. I want to inform you about a growing concern in our community regarding Domestic Violence. Devonshire Division is experiencing a 62% increase in Aggravated Assaults, which includes Domestic Violence, Road Rage incidents, Battery, and Assault with a Deadly Weapon, just to name a few. Most of these assaults are Domestic Violence related.

In California, it is a crime for any person to threaten, beat, sexually assault or otherwise harm another person, even if they are married. Battering is not exclusively a crime against women, but they are the majority affected.

If you are a victim of domestic violence, now is the time to start thinking about protecting yourself. Calling the police, telling a friend, or contacting a shelter is the first step. Please don’t wait until it is too late. Many studies show that an uninterrupted cycle of violence only worsens over time. Hotlines and shelters are there to be used and counseling is available. It’s as close as a phone call and it’s free.

Take care and be safe!